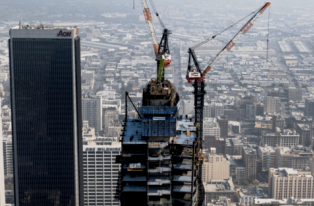 For Los Angeles, let’s call 2016 the year of the skyscraper. The 73-story Wilshire Grand Center was crowned with a decorative spire that reaches a height of 1,100 feet, making it the tallest building in Los Angeles. It edged out the US Bank Tower for that title, but not to be outdone, the bank tower made news headlines around the world with the opening of a hair-raising glass slide attached to its exterior, dropping from the 70th to the 69th floor—nearly 1,000 feet in the air. Meanwhile, developers, by our count, filed plans over the past 12 months to construct nearly one dozen impressively tall towers. More than half would rise above 40 stories, earning them the designation of “skyscraper.” The tallest of these would climb 60 floors, so for now, it’s looking like the Wilshire Grand and US Bank Tower will remain the queens of LA’s skyline. But to get a sense of just how much that skyline is likely to change, we’ve mapped all of the skyscrapers and tall buildings proposed just this year. 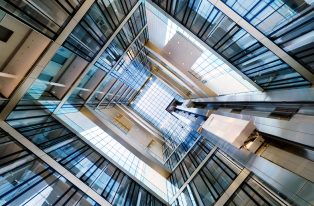 For all the attention given to the role of cars in our urban landscapes, lifts are becoming the global city’s truly indispensable transport. At a recent event held by Otis to sell its new “Gen2 Life lift” into London’s ascending skyline, there was a real sense of being in a bull market. “Already two billion people travel by lift every day ­– that’s a quarter of the world,” said Otis’s commercial director Bertrand Rotagnon. “Cities are becoming taller and need densification. Mass lift transit is part of the future city landscape.” Add ageing populations, disabled access, the lust for “signature skylines” with better lift technology, and the future of the lift appears secure and profitable – a market estimated to be worth $125.22bn by 2021.

Oliver Bennett in The Guardian The meteoric rise’of lifts: will a new breed of elevator transform our cities? 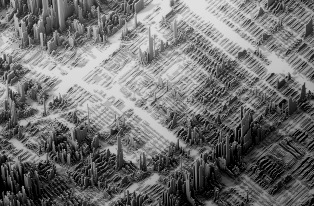 In one part of Chicago’s Near West Side, the median household income is $104,000. In another—about a mile away—it’s about $20,000. A recent data visualization maps out the city’s stark income inequality in diagrams that look like a skyline: The taller the “building,” the higher the income on that block. “It was really important to me to create the image of a city, and create this kind of post-apocalyptic ambiance,” says Austrian designer Herwig Scherabon, who mapped income in Chicago, L.A., and New York City as part of a larger Atlas of Gentrification. “When you look at it, you start to explore. The street grid is still visible in the visualizations.”  Using height to illustrate differences, instead of a standard heat map, makes the problem even more obvious. Chicago wasn’t always so starkly divided: In the 1970s, nearly half of the households in the city were middle class. Over the next four decades, Chicago added almost four times as many wealthy census tracts, while extreme poverty also grew. By 2010, middle-income tracts made up only 16% of the city. Read on >>> 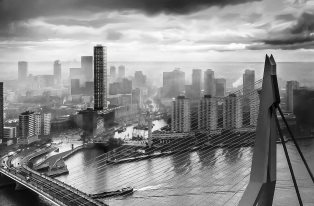 Dutch firm Powerhouse Company has unveiled plans for a high-rise apartment block in Rotterdam, which could become “the slimmest residential tower of Europe”. The skyscraper named Baan Tower is set to reach 150 metres high with a compact footprint of just 20 by 20 metres. Designed for a site near Rotterdam’s Erasmus Bridge, the 47-storey-tall tower will be faced in dark grey stone and feature aluminium window frames. Its 21,000-square-metre plan will house 145 apartments with an extra two duplex penthouses occupying the top two levels. 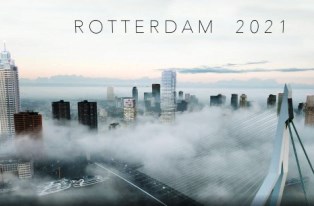 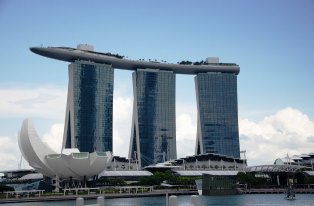 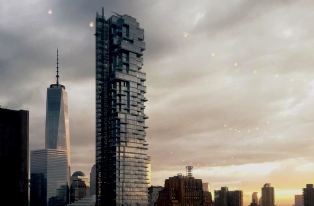 Kicking off Dezeen’s review of 2016, architecture editor Jessica Mairs looks back at 10 skyscrapers that have bent the rules in the past year, ranging from a triangular tower in New York to a Lego-like Singapore tower and the world’s second-tallest building.