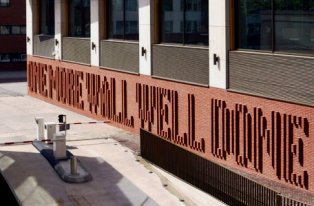 Martijn Sandberg has realised a site-specific artwork on the Southern facade of First, a new build project on the Weena in Rotterdam, The Netherlands.
The brick facade relief covers a wall surface measuring three and half metres high and twenty seven metres long.
A message has been left on the wall, written in relief with brick letters two and half metres high. A text becomes visible in the play of light and shadow on the brick wall of the building’s side facade: ‘One more wall well done‘.