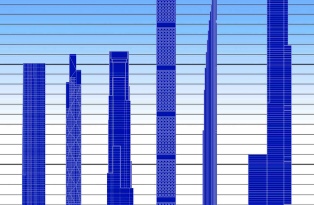 New York’s skyscrapers are taller and skinnier than ever before: New York’s Skyscraper Museum has released an online tool that tracks the growing number of skinny towers in the city. The interactive chart compares the heights and silhouettes of 18 so-called “super-slenders” now complete or under construction in New York. Many of these measure well over 1,000 feet (305 metres), and some have ratios of base-width to height as extreme as 1:23. The new towers are taller and skinnier than their precedents. The benefit is a whole new fascinating crop of individualistic towers on New York’s evolving skyline.
Skyscraper Museum chronicles explosion of “super-slender” towers in New York“.