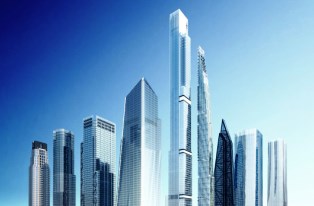 The rise of the supertalls has been several years in the making, and One57, 432 Park Avenue, and One World Trade Center have offered a preview of the increasingly gargantuan changes taking place across New York City. But 2016 will mark the start of a new era for the city’s skyline. With six supertalls of 300 meters (984 feet) or greater now rising, the city’s total number of such buildings will nearly double, from seven to thirteen. The New York Post featured YIMBY’s compilation of the towers.

Manhattan long held the title of the world’s most impressive skyline, with the boom of the 1920s cementing the island’s status as the skyscraper capital of the globe. The Chrysler Building (at 1,046 feet) and the Empire State Building (at 1,250 feet) marked the city’s first official supertalls, and the ESB held the title of the world’s tallest building until the Twin Towers of the original World Trade Center were completed in the early 1970s.

« Record number of skyscrapers completed in 2015
The Engineering of Architecture »