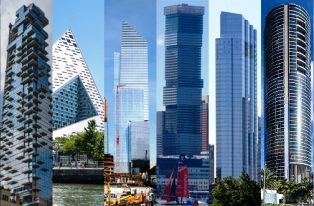 As part of the search of SkyHighCity for the best skyscraper of 2016, this time they look at North America. With 93 completed buildings of over one hundred meters to chose from, New York City appeared to have a number of strong contenders, so they decided to split this one up intoa Big Apple tournament, and one for the rest of North America.

With a tournament including the very well published VIA 57 WEST, 56 Leonard Street and 10 Hudson Yards, it’s perhaps a bit of a surprise that Robert A. M. Stern’s design for 30 Park Place took the crown for New York. JMGA196’s comment is the most convincing argument in this result.